Although Pokhara Regional International airport was targeted to be complete on July 10, 2021, under the plan of the national pride project, the time has been extended till July 10, 2022, due to problems in completing the construction work on time due to Covid-19 second wave and possible third one, said project chief V. Munakarmi.
Date: August 8, 2021.

New International Airport of Pokhara Is An Alternative to Kathmandu

Besides this newly constructing Pokhara International Airport, there is already one small domestic airport. Nepal Government is making this Pokhara International Airport in Gandaki province. It lies just 3 km east of the current domestic airport. Civil Aviation Authority of Nepal (CAAN) acquired 155 Hectors of land in 1975 from local. However, the total area of Pokhara Intl Airport will be 200 plus Hector by its completion. 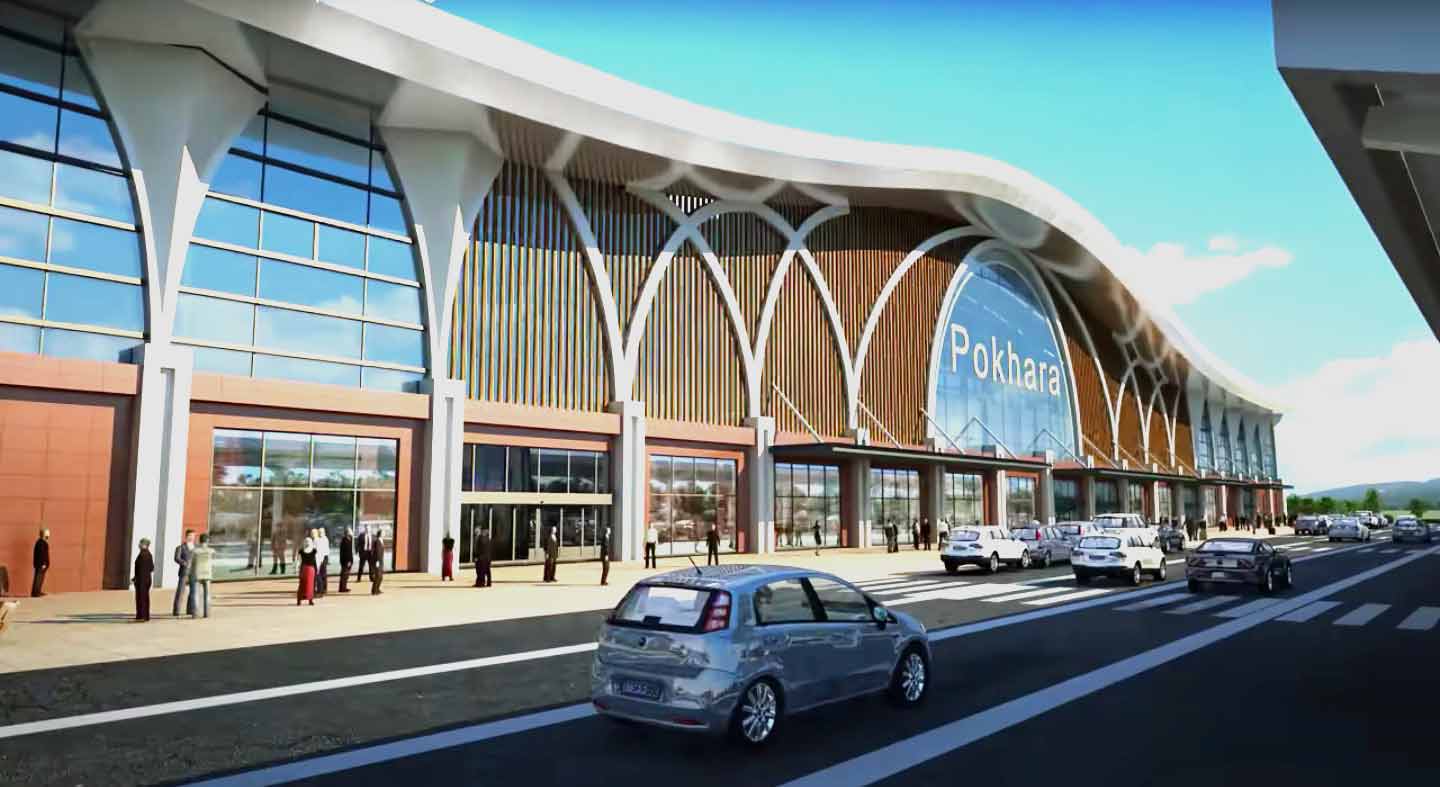 .To welcome the international tourist directly to Pokhara, Honorable Prime Minister KP Oli laid the foundation stone three years ago. The target to finish this and hand this project to the Nepal Government is in July 2021. So, the construction worker has been working continuously to meet the deadline, even in the period of Coronavirus lockdown. The workers are working hard to complete 92% of the work by 2020. In the same vein, the rest 8% by 2021 September, and get ready for the operation of Pokhara International Airport. It will help thousands of trekkers and travelers skip the crowded sky and land of Kathmandu. It will also help to contribute to economic and social development as well as promote tourism.

Construction and Funding of New airport of Pokhara

To build this mega project in Pokhara, the Civil Aviation Authority of Nepal handed this project to Chinese CAMC Engineering. In may 2014, CAMC and Nepal Tourism Ministry sign the contract was. However, the construction begins in 2016 April. CAMC Engineer Company got the contract from CAAN for airport engineering, procurement, and construction. In addition, EXIM Bank of China provided a $215.96 million loan with an agreement to the Nepalese Ministry of Finance. After all the procedures, the construction started in July 2016. This airport project has created many employments during construction, which goes further even after the operation phase. As the latest work progress reports from the Civil Aviation Department, over 62% of the project is already completed.

Finally, all national and international travelers will get benefits with the completion of this Pokhara International Airport. And will have an option to land in Pokhara Instead of busy transit in Kathmandu as Pokhara is one of the major tourist destinations. Indeed, this will serve as an aerial gateway to the most popular Annapurna region trekking

Pokhara is the second biggest city in Nepal after the capital city of Kathmandu. Similarly, the natural beauty of Pokhara with a variety quality of Himalayas, Lakes, Valleys, Forest, and center of Adventure activities make Pokhara Best City.

Manaslu Trekking Region surrounds them in the Northeast, Mustang, and Annapurna Trekking Area on the North. Likewise, Dhorpatan and Baglung on the west make Pokhara a center for trekking in Nepal. After the operation of Pokhara International Airport, it will be easier for you to complete the many trekking in Nepal in your short time. Here is some Best Short trekking from Pokhara, and around that, every trekker will benefit from Pokhara Airport. 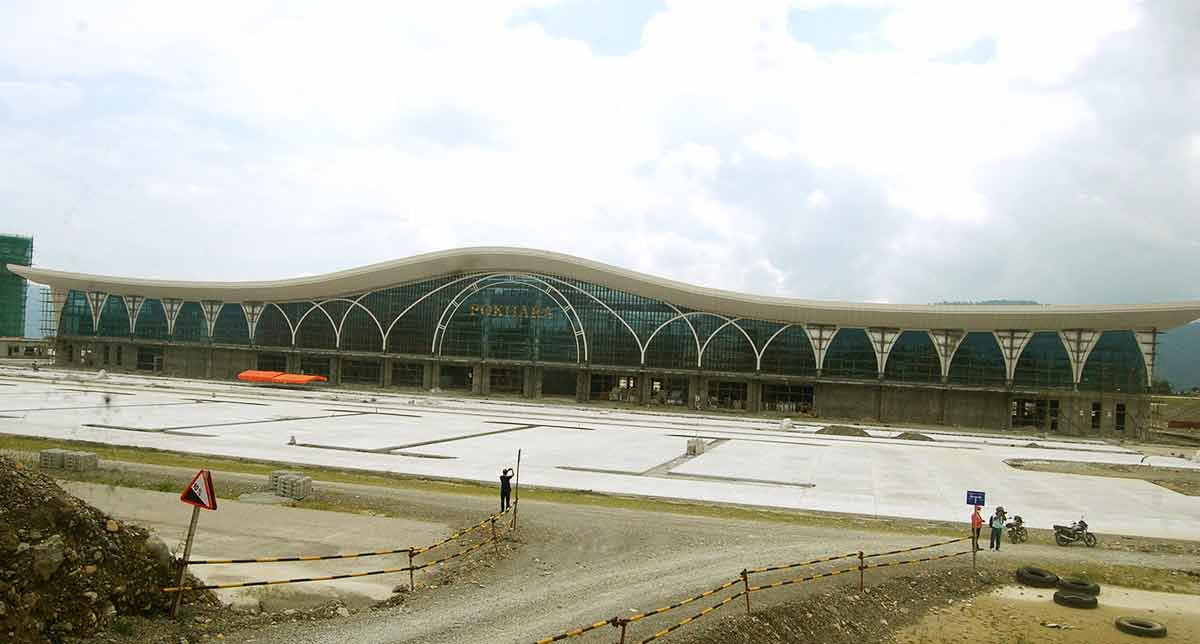 Some Facts of New International Airport of Nepal

New Airport of Gandaki, Nepal is the Habitat of Vulture and Eagle

As the news of Kantipur Daily on September 10, 2020, the construction of Pokhara Regional International Airport continues. However, new challenges arise from the birds like vultures and eagles. Various bird conservation groups working around the Pokhara and Lekhnath warn the Civil Aviation Authority of Nepal (CAAN) and Pokhara International Management Committee to develop effective plans to solve this problem. Ultimately this helps airport management to stop future unforeseen incidents. Birds Conservation leader further adds that two rivers Frushe Khola on the south of the airport and Bijayapur River on the East, are the best habitat for these carnivorous big endangered birds. These rivers carry lots of dead animals from far away, which works them as food providers.

Online news of Nepal mentions that on July 6, 2021, it will take another six months to complete the construction of Pokhara International Airport. However, it comes under the national price project.

Previously it was paan to complete by mid-July 2021 but could not achieve the mentioned timeframe due to the Covid-19 pandemic. Deputy Manager of Pokhara International Airport Project said the delay is due to the second wave of Covid-19 as Nepal apply 72 days of nationwide lockdown in April-June. However, the work was not in halt but the number of workers down to 200 from 500. To complete the project on time, we need 300 Chinese technical workforce, but we all his out of control due to the Covid-19 second wave. Currently, 160 Chinese technical crew are at the job.

Although Pokhara Regional International airport was targeted to be completed on July 10, 2021, under the plan of the national pride project, the time has been extended till July 10, 2022, due to problems in completing the construction work on time due to Covid-19 second wave and the possible third one, said project chief V. Munakarmi.

No limits to this; juggle in between Annapurna Trekking Region, Dhaulagiri, and Manaslu Himalayas trekking that you can start from Pokhara. Above all, with the operation of Pokhara International Airpot, new trekking destinations will rise along with the above popular treks. In short, Pokhara International Airport does not only help you to travel straight here but also helps Nepalese economy and Tourism activities.