Nepal; the Home of the highest mountains now hosts the Second highest bungee in the world. Although bungee is not new in Nepal, there is already 3 other bungee in operation in Bharabishe and Pokhara, but more highlights because it's the matter of the world’s second tallest bungee jump. More importantly, the world's highest swing jump and Tandem swing of 228-meter sky between the natural gorge attracts more.

The name of this world's second-highest bungee is The Cliff. We believe the natural cliffs on the side of Kaligandaki River give the Name. This 224 meters tall bungee is attached to 520 meters long steel suspension bridge, which connects Balewa and Kusuma.

Where is the Highest Bungee of The World, then is the obvious question. The world’s tallest bungee is in Makau, China named Macau Tower Bungee Jump. This is in the city center of Macau at the AJ Hackett Macau Tower. All adventure thrillers can jump about 232.9 meters above ground level.

Location of second highest bungee of the world and tallest swing?

Where is the highest bungee jump in Nepal and which river is it over is the major question for adrenaline travel junkies? The highest bungee of Nepal is The Cliff, based on the natural river gorge of Kali Gandaki. This bungee bridge connects Balewa of Baglung and Kusma the district headquarter of Parvat. However, this 520-meter long suspension bridge is just constructed for adventure tourism purposes, not like the Bhotekoshi river bungee.

Technical Figure and Structure of World Highest Swing and Bungee

Let's talk about the technical figure and structure of the world's highest swing and second tallest bungee jump. The bridge is specially design for bungee, swing, and other rope and jump adventures. Although the bridge is based on a single-span suspension pedestrian design, it has some more features to make it more stable during Bungee and swing. The length of the bridge is 520 meters (1706 ft) hanging above the Kaligandaki river between the cliff of Kusma Bazar and Balewa airport. The company mentions the actual height from river level to the bungee base at the bridge is 228 meters. Most importantly, the actual bungee jump height is 215 meters to make you thrill.

How to Reach to The Cliff ( Bungee Center ), Highest Swing

Reaching the highest bungee center of Kusma is easy. Although you need to drive about 265 km from Kathamndu but just 65 Km from the beautiful Pokhara. The road is asphalt and quite beautiful, however full of truth and bend. A private drive takes 2 hours from Pokhara and 7 from Kathmandu, but the public takes a few hours extra. Regular bus and minivan (Hiace) are in services to Kusma from Gongabu bus terminal. Bus leaves at 6-7 and van leaves between 6-10. In the same vein, night bus services also take you to your destination of the World’s second tallest bungee jump of Nepal. The bus leaves about 18-20. The actual resort of Bungee Center is just 10 minutes easy walk from the bus terminal of Kusma.

You can enjoy the local public transportation or hire a taxi to reach there. Even van and jeep services are there in Pokhara to take you to the Second Highest Bungee Jump in the World.

If you are near Pokhara; The Cliff, where you can enjoy the world's highest swing with bungee, it's a day trip for you. If you are doing Ghandruk, Lespar, or Poon Hill Trek you are just 17 away to there where you start your trek. However, the bungee center is on your way if you are on Jomsom Trek, Upper Mustang Trek, Muktinath Trip, or Baglung Hiking.

Similarly, if you are on your adventure trekking of complete Annapurna Circuit, Hot Spring, or Mohare Danda Trekking you will cross this Bungee and Swing center. Most importantly, the High Bridge Trek of Trekking Trail Nepal is the best way to explore this Second Highest Bungee Jump of the World. Here we cross the bungee bridge, spend overnight in their resort on the side of the cliff. With the flight also you can reach there to the Second Highest Bungee Jump in the World. The Baglung Airport of Balewa is just 15 minutes walk away from the cliff resort at Baglung's end. Baglung Airport, international air transportation association code is BGL. However, there is only a connection from Kathmandu and flights twice a week, Monday and Thursday.

Even these flight is on halt due to upgrading the runway, however, you can charter a helicopter from Pokhara or Kathmandu to make the thrilling adventure with luxury.

Cost of Highest Bungee Jump and Swing at The Cliff, over Kaligandaki.

Cost of Bungee Jump and Swing at The Cliff, over Kaligandaki

NOTE: The Day trip from Pokhara includes both ways the cliff transportation from Pokhara. Further, it includes welcome drinks and a buffet lunch at The Cliff Resort at Balewa side, Baglung. 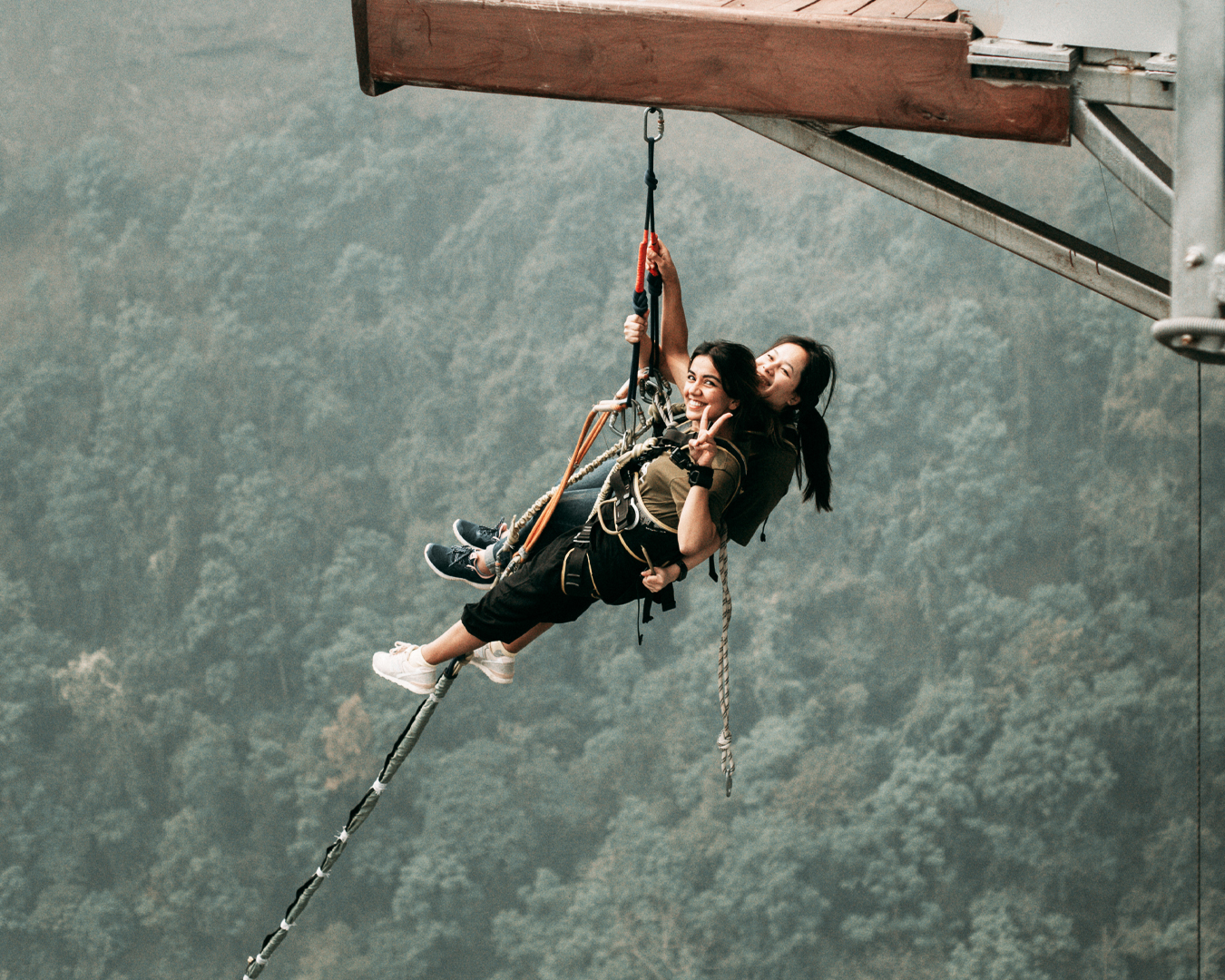 The Cliff is and the world's highest bungee and swing are not only the attraction here. The beautiful river meeting point of Modibeni is one to experience. Here, the Modi river coming from Annapurna Base Camp and Kaligandaki river from the upper Mustang meed deep down of the cliff. Similarly, the 3 high bridges next to each other at the end of Kusma is another attraction along with a cable bridge on the side of the Bungee bridge. Similarly, views of a deep valley, natural river gorge, and the town of Kusma from the side of Balewa Airport just above the cliff are awe-stunning. The Second Highest Bungee in the world and the world's tallest swing is not the only attraction here. You will dip with thrilling adventure with nature, culture, and peace.